This series began in May 2011 when I re-discovered pre-historic art in the Dordogne area of France. I was particularly struck by the tiny ‘Venus’ figures found in the area. I have had a reproduction of the Venus of Willendorf for forty years and more recently have collected several reproductions of Venus figures found in France – but it was in May that I discovered the Venus of Sireuil, a beautifully curvy kneeling torso with no head, hands or feet and very tiny. Although these are about 25,000 years old, I feel a connection with the women who might have held these figures in their hands, much as they fit into mine.

This series of work is about confronting the past in many different ways, drawing on my own experience of living in a valley close to cliff shelters where people have lived for more than 80,000 years and visiting places where people left evidence of their lives.

The Venus figures are at the heart of this series, sometimes appearing as distinct entities and sometimes fragmented or diffused. They may be hidden or partially revealed, may be buried in the archeological strata or may be appearing to dance with each other through veils of time.

We are there too – people of today becoming immersed in this ancient homeland – looking at them, visiting their homes and caves, also becoming part of the environment that has supported life for so long.

Astonishingly, the art from so long ago communicates with us very directly. We recognise the animals and people that they drew, we share a sense of appreciation of their compositions, forms, colours and the quality of the marks they made. We also glimpse their awareness of motherhood, community and of mortality. The myths, legends, stories and historical studies merge with our experience and interpretations; these layers of understanding metaphorically reflected in the layers revealed in excavations.

A very helpful co-incidence led to my learning to use new techniques and materials to make monotypes at a workshop run by the inspirational Ron Pokrasso. All the works on paper in this series are monotype and this new approach proved to be perfect for the ideas I was developing about the Venus figures.

Some of the monotypes have chine colle, a type of collage, which allows images from other printing methods like etching, woodcut and relief printing to be built into the print, which often passes several times through the press. Consequently I was able to bring some images from earlier work into these new prints, building up complex ideas and images from many related elements.

In many of the prints there are references to ideas that resonated strongly for me – the ancient figures hiding until they are ‘discovered’ by archeologists (or perhaps because it is the right time for them to emerge). I see the layering of the archeological levels as a metaphor for the layers of time and the different qualities of the images reflect the veils that time has drawn over successive periods.

The Venus figures are often wearing jewellery and many beads and necklaces have been found. I was particularly struck by the delicate shell necklaces because when I was a little girl I had a shell necklace, just the same as these. I’m sure that my feelings about that necklace were similar to ones that girls and women then would have had.

Viv has written a book about how she made the ‘Goddess Series’ of prints. Available as paperback or eBook HERE.

The monotypes are unique prints but share the same measurements (H40.5 xW30.5 cms). They are all printed with Akua inks on Arches 88 paper and many have chine colle, collaged or direct relief print added. Some of the added images are fragments from woodcuts, etching and drypoints and others are drawings on Japanese papers. Please click on each image to enlarge. 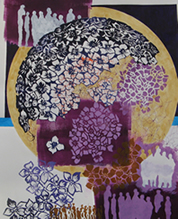